skip to main | skip to sidebar

Hotter on a Bike! 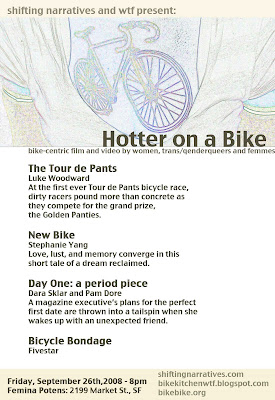 Posted by greenspokes at 2:13 PM No comments: Bike-centric films by women, trans/genderqueer folks, and femmes are featured in this screening in conjunction with the bikebike! conference.

Day One: a period piece
A magazine executive’s plans for the perfect first date are thrown into a tailspin when she wakes up with an unexpected friend.
Dara Sklar and Pam Dore - co-directors

8pm
Friday, September 26th, 8pm. Femina Potens 2199 Market at Sanchez.
5-15$ no one turned away for lack of funds
proceeds help fund films and bike education projects!
Posted by greenspokes at 4:54 PM No comments:

Monday Sept. 29, 8pm at El Rio. Please join us to celebrate our 5-year anniversary and support our fundraising efforts! We'll be there all night, with bands, a slide-shows, a raffle and cool shwag. Sliding scale $8-100 and $1 drinks!

Posted by greenspokes at 8:13 AM No comments: 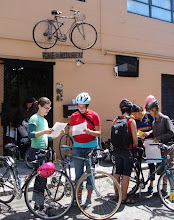 WTF at the bike kitchen in a monthly night for all folks who've had gender be a barrier to bike mechanics.

Volunteer mechanics help you fix your bike yourself!
Tools and used parts available, suggested donation for day use is 5-10 dollars. OR join the BK for 40-100 for the year, and get access to tools and help 4 days a week, plus WTF night.